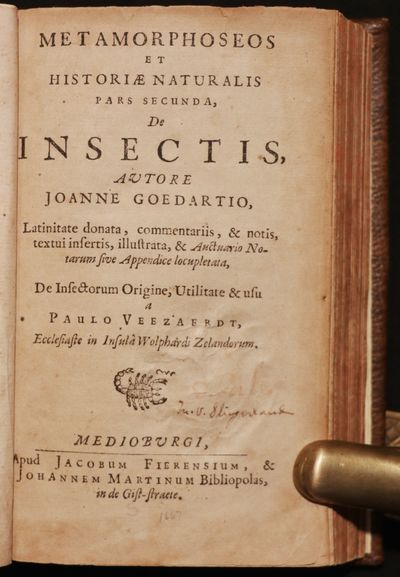 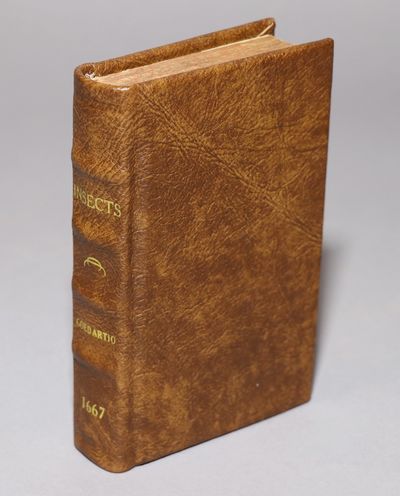 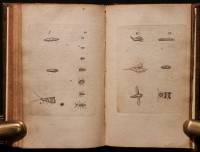 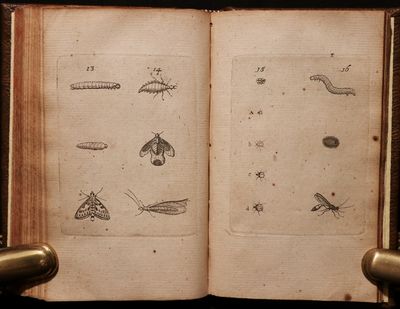 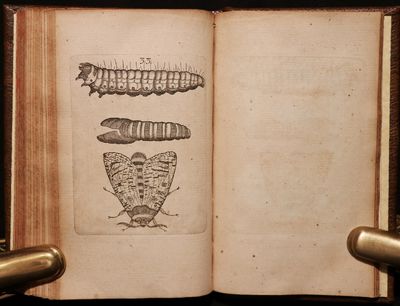 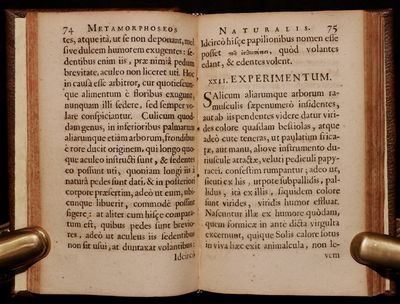 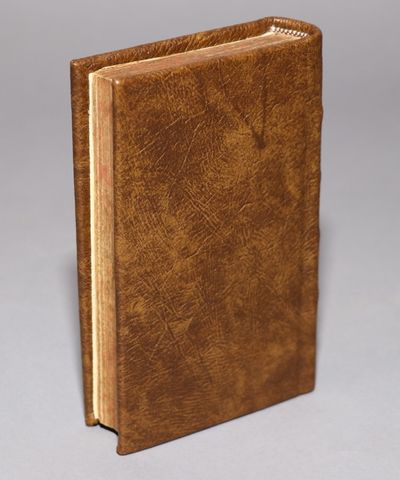 Volume 2 of this very scarce early study of metamorphosis in nature. 12mo. [32], 259, [1] pp, + 42 leaves of plates. Rebound in modern leather, lettered with gold foil, new endpapers, title with early ink signature and blindstamp (which appears to have been aggravated by an attempt to remove it), otherwise contents clean overall with some intermittent toning. A very nice copy.

Little is known of Goedaert's life. He probably did not receive a secondary education. He apparently did not know Latin, and wrote his only book in Dutch; the Latin translation, which is the best known, was the work of others (see below). He certainly did not attend a university.

Goedaert is remembered as a painter, more particularly as a watercolorist, whose subjects were mainly birds and insects. According to his biographer C. de Waard, it appears that he had some knowledge of chemistry and pharmacy; it is reported that he knew how to make a remarkable extract of Artemisia absinthium and how to eliminate the tendency of antimony to cause vomiting. Goedaert lived all his life in Middelburg. He married Clara de Bock and by her had one daughter and one son, Johannes, who became a surgeon.

One of the earliest authors on entomology, Goedaert was the first to write on the insects of the Netherlands. More important, he was the first to base his discussions entirely on firsthand observation instead of making the traditional appeal to authority, citing and paraphrasing the work of predecessors. In his only work, Metamorphosis naturalis, he describes his observations of and experiments with insects made between 1635 and 1658.

Basically, Goedaert's technique was to catch "worms" (larvae) in the field and to rear them, feeding them with their natural nutrients and observing and recording their metamorphosis, until finally the mature animal could be observed and drawn. In this way, he studied the life cycles of a variegated collection of butterflies, bees, wasps, flies, and beetles. Goedaert's pioneering work is not without its faults. He made no attempt to devise a system of insect classification such as Swammerdam would do as early as 1669, and although aware that most of his "worms" originated from eggs, he believed some were produced by spontaneous generation. The year of his death saw the publication of Redi's Esperienze intorno alla generatione degli insetti, in which the possibility of spontaneous generation was denied for the first time. Goedaert's fieldwork was not sufficiently extensive to enable him to solve the problem of the ichneumon wasps. He reported that of two identical caterpillars, one yielded a beautiful butterfly and the other no less than eighty-two little flies. He also made anatomical errors, for example when he related the position of a caterpillar's legs to the position of the pupa in the cocoon.

Goedaert published two volumes of his book during his lifetime, in 1662 and in 1667. A third, posthumous volume was edited by Johannes de Mey from his papers at the request of his widow. De Mey also translated the first and third volumes into Latin, adding commentaries of his own on insects and comets, mostly the kind of material that Goedaert has been praised for omitting. The second volume was translated into Latin by P. Veezaerdt, who abstained from comment but added a chapter of philosophical speculations on insects.

30 day return guarantee, with full refund including original shipping costs for up to 30 days.

In Order to Chat, Choose a Username…

Sorry, this part of the book fair is unavailable in advance of the event. Please check back then!